On my previous post, I covered the first blind A/B tasting session using the “Gingerlime Tasting Technique” ™. You can read some more background about the motivation and method, as well as a full list of coffees I’m comparing on the first post in the series.

After the first taste using pour-over Hario V60 filter, I was anxious to find out whether both A and B coffees will show similar characteristics using other preparation methods. Namely: Espresso, Aeroproess and Cappuccino. Would B stay my favourite when served with milk? Would the Aeropress extract different flavours out of A than I managed with the Hario?

On this tasting session, I was trying to produce an Espresso from both beans.

Just a reminder. A and B can be any of the following 5 types of beans in this experiment:

I assigned each coffee with A, B, C, D, or E randomly. Those assignments are consistent throughout this series of blog posts. So when I mention A it can only be one type.

But lets get back to our tasting session.

I already had a favourite in my mind, so it was hard not to be biased before even starting. I could try to make coffees without knowing which bean I was choosing, but as I discovered pretty quickly, looking at the beans alone, I could figure out which bean was A and which was B. The smell of the ground beans, once I already compared them before once, would be enough to reveal. So instead of trying to trick myself, I went with this bias, but tried to keep an open mind.

As with the previous method, timing was crucial. I only have one grinder and one coffee machine, so I tried to make two espresso shots as fast as possible one after the other. Still trying to give each shot its fully deserved attention. Not easy. Even less easy is trying to take photos in between. Some photos turned out a little blurry, so there are some missing (for example of the ground coffee in the portafilter). When I’m rich and famous, I’ll hire a photographer.

I was a little worried about the Espresso test. Getting the right grind for the bean is important, tampering and the right quantities. It usually takes a bit of experimentation when switching to a new type of bean. But I just went with it, and luckily, it wasn’t too bad. Maybe those beans have similar characteristics, or I was lucky. I measured 17g of beans for each cup. Set my grinder to 4 and hoped for the best.

As you can see on the photos, both extractions went reasonably well. Not gushing out too fast, not too thin trickle. I didn’t measure the exact timing of each cup, nor the exact quantity produced, just followed my instincts. 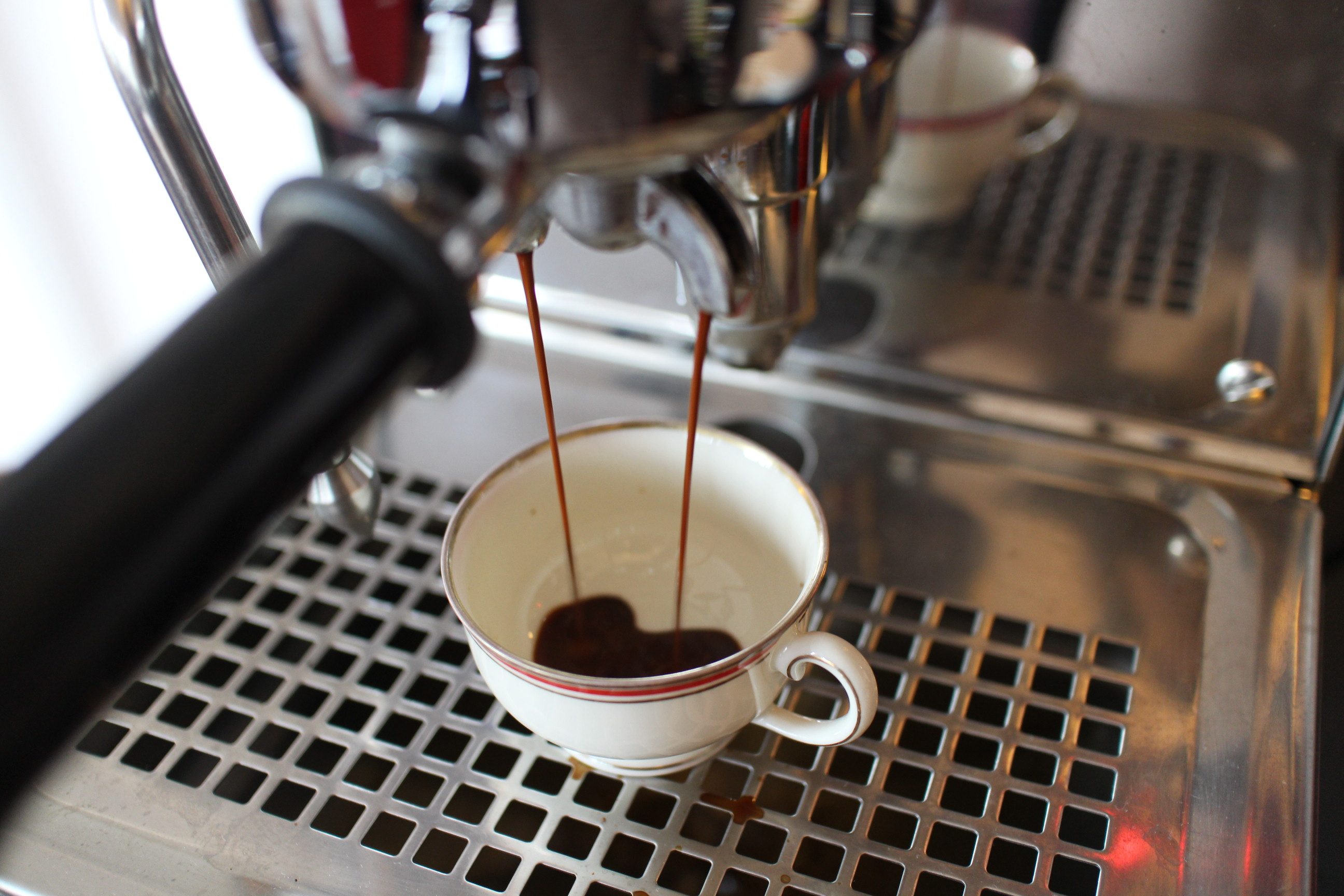 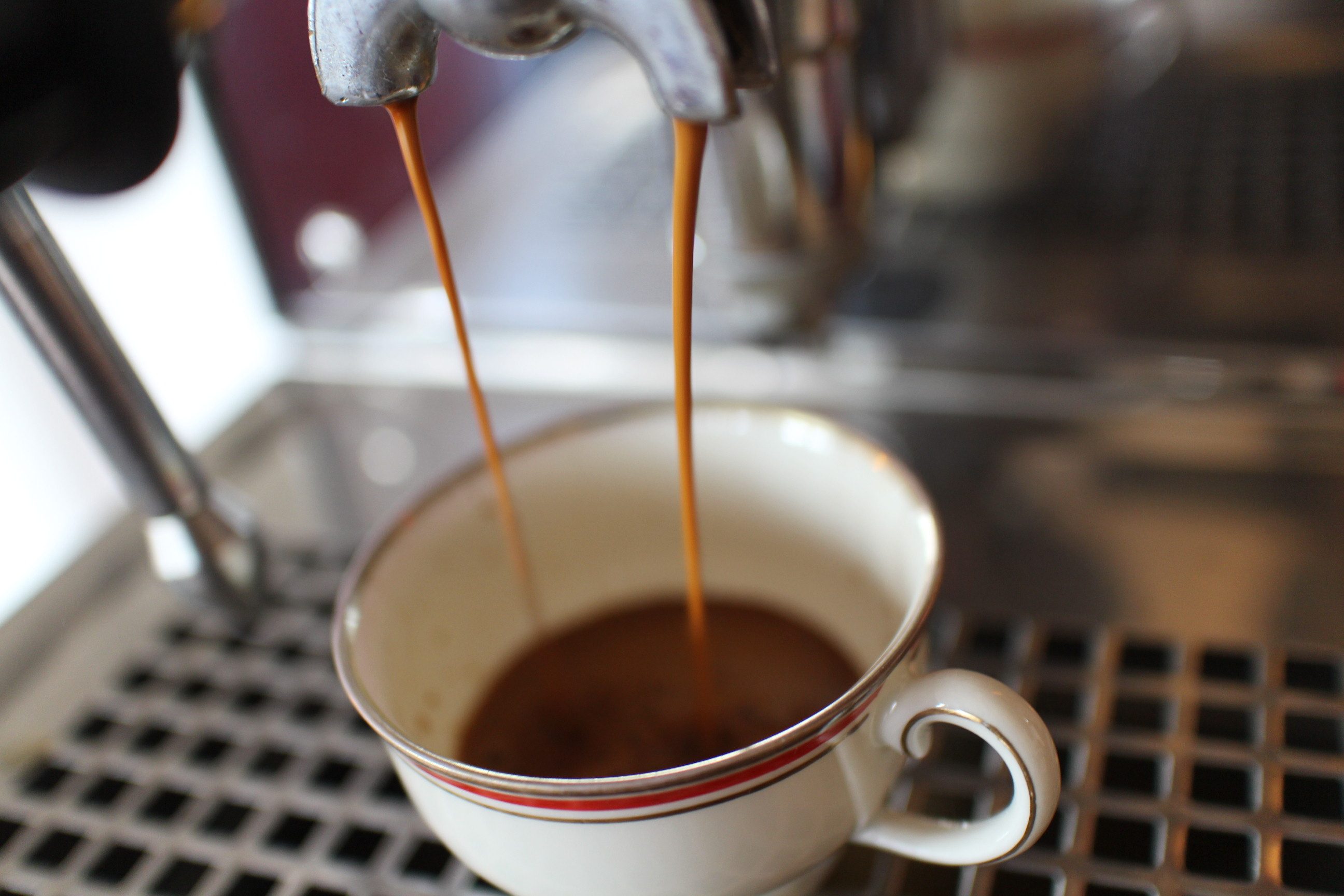 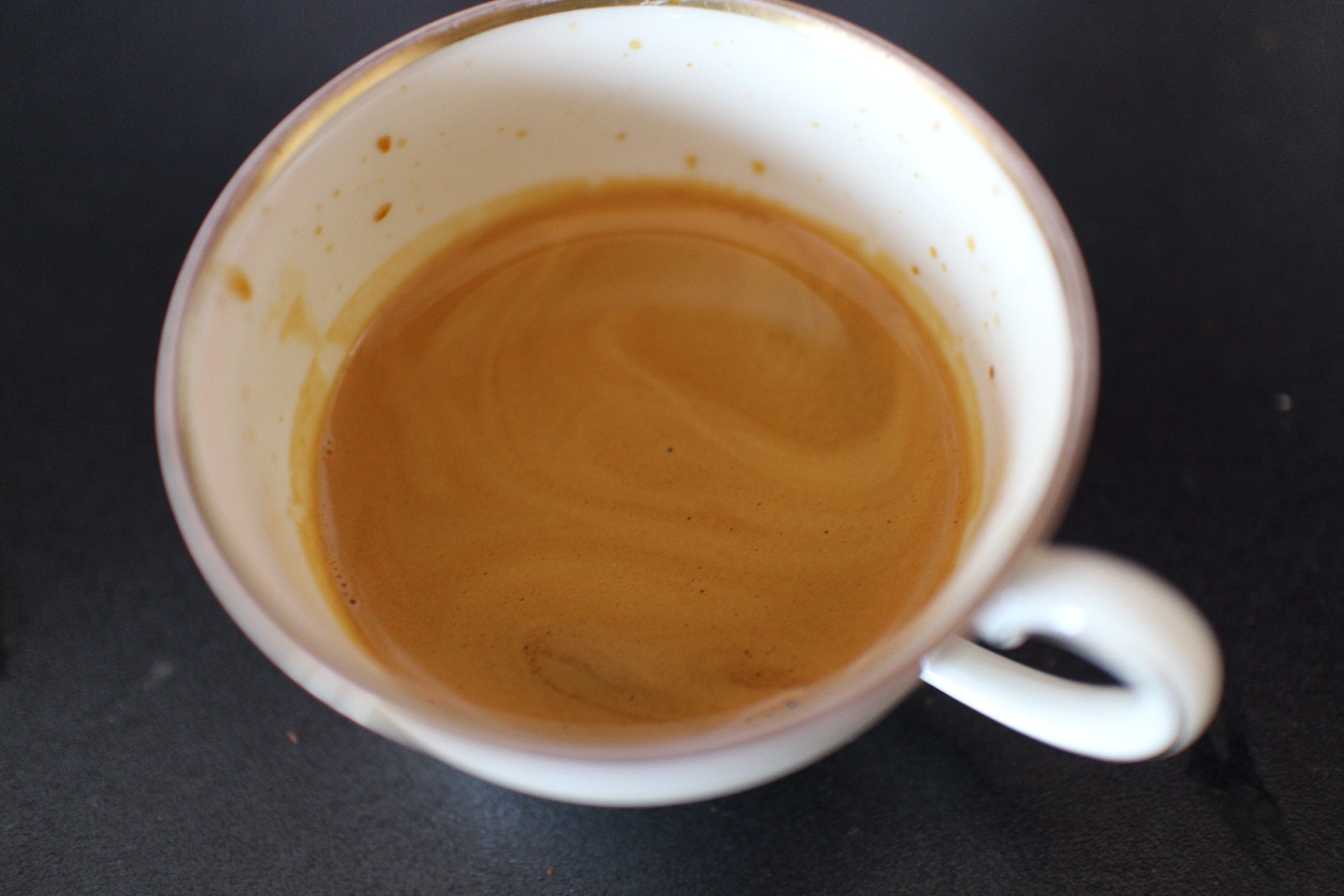 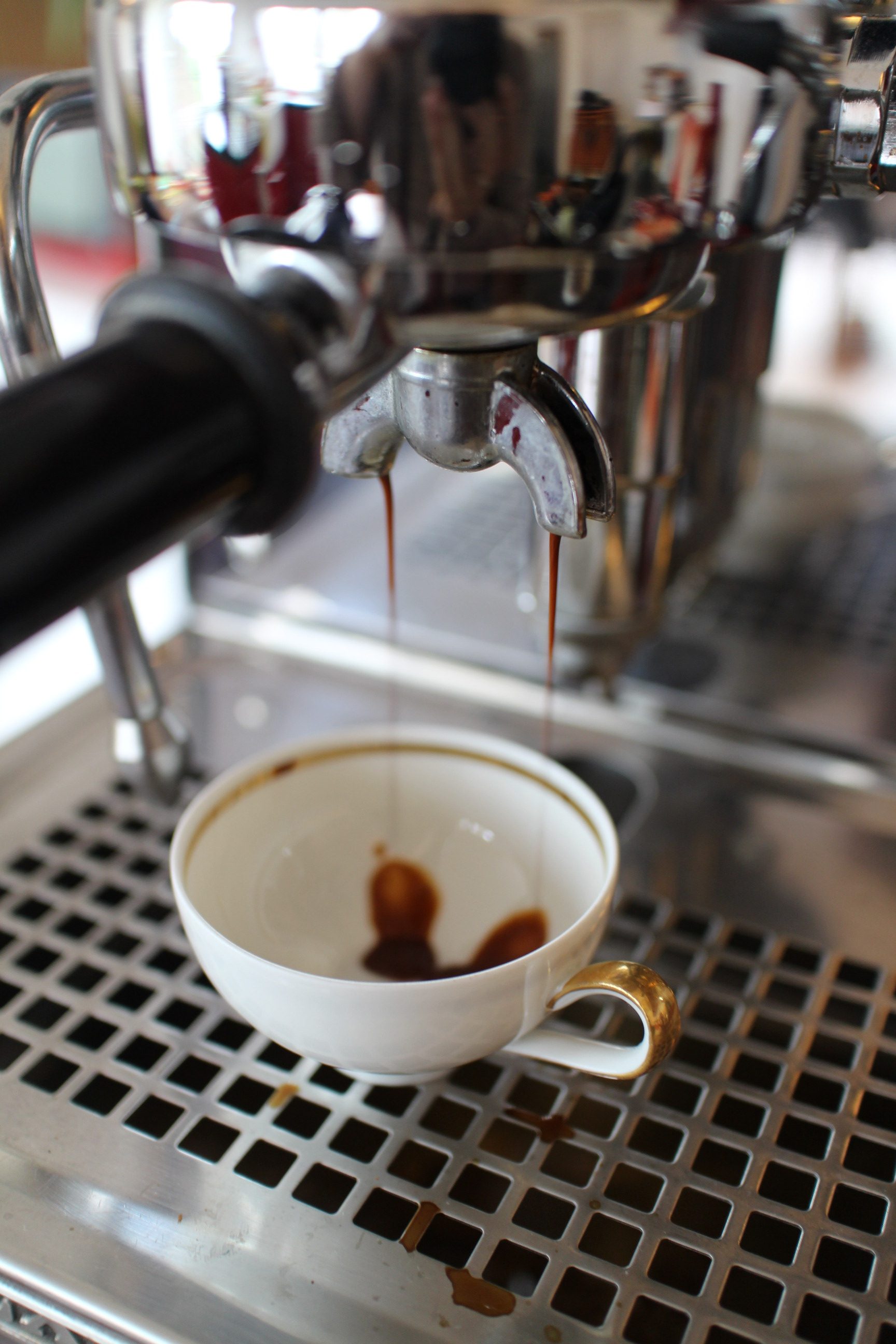 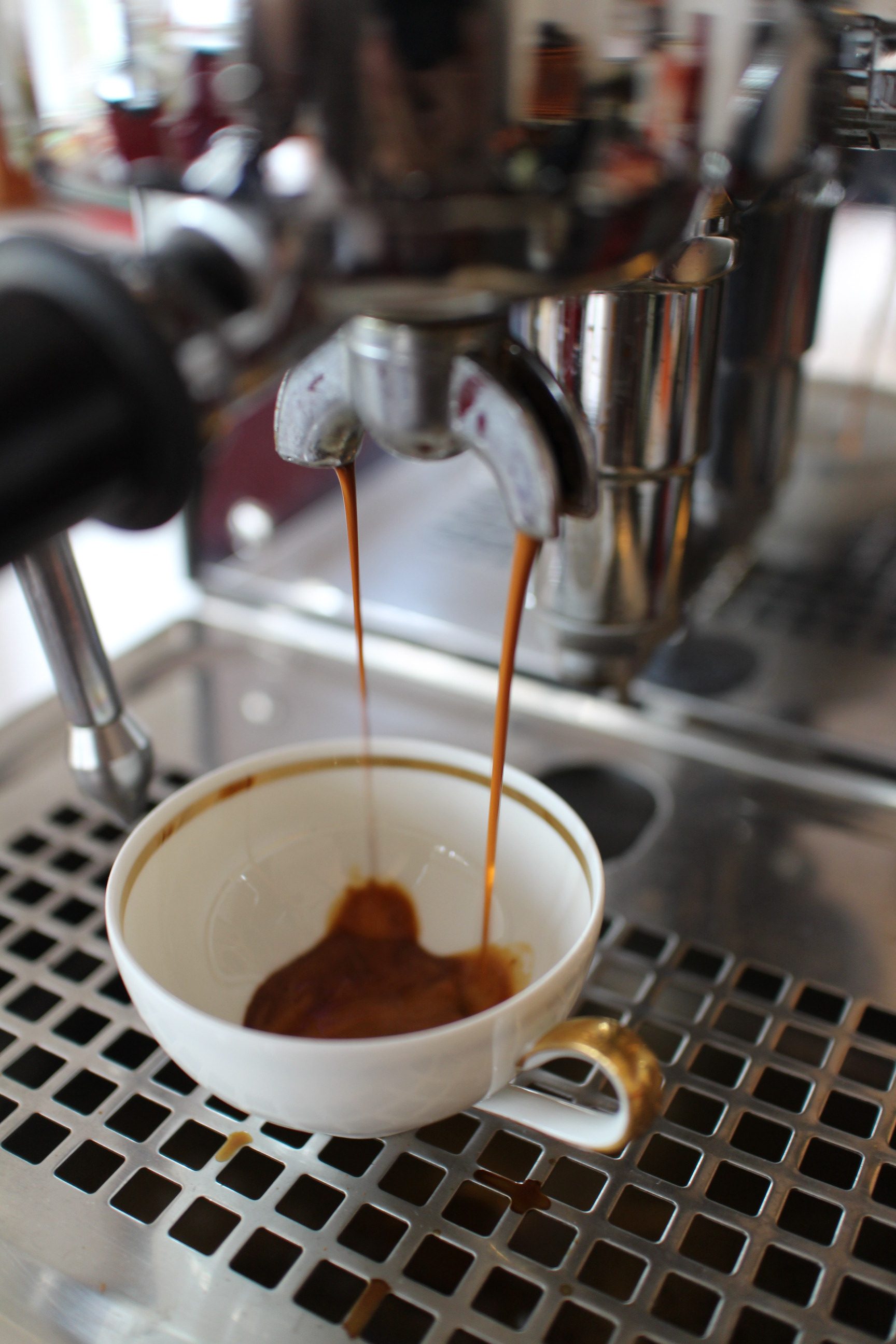 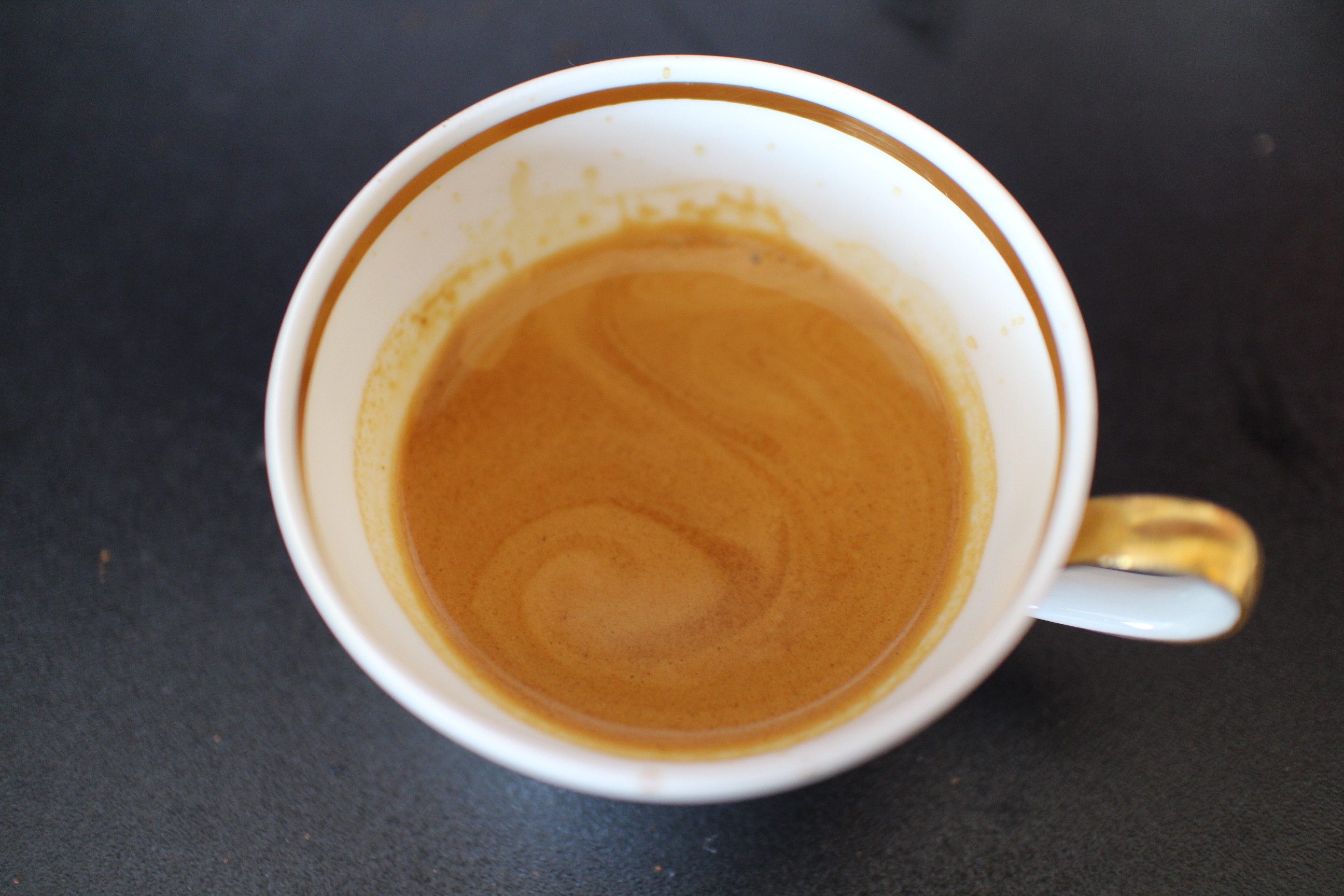 Both A and B produced a fairly nice crema. Both had nice golden colour. In terms of aromas, I could not get as clear distinction as I could with the Hario, but there was still a subtle difference. I could spot more Marzipan flavour in B than in A, which was what I expected.

Taste-wise, B had nicer complexity but lightness, however it felt slightly more sour (does it mean acidic?). A felt quite robust in comparison.

I gave it to my wife to taste. She wasn’t involved in the preparation and it was the first taste for her. So she definitely wasn’t biased. However, she doesn’t drink Espressos normally since it feels too strong for her. Nevertheless, she gave it a good taste and said that A “felt like burnt soy-sauce”, whilst B had a “Caramelised sugar flavour” (which honestly I could not sense myself). I was very pleased with my preference for B though.

So another successful round for B.

Next round – Aeropress and Cappuccino

On the next post I’ll cover both the Aeropress and Cappuccino tasting for A / B. A little spoiler: I was intrigued to try the inverted method of brewing with the Aeropress for the first time. I think it was a mistake not to try to learn the ins and out of this technique first. On the other hand, the Cappuccino tasting went better than I’d expected, with some surprising results as well. Stay tuned for more.

UPDATE: Latest post was just uploaded. You can read it here

Drop the spouted porta filter and get a naked one with VST baskets. Spouted PF’s collapse the crema and mask your mistakes which can cause all manner of problems – eg horizontal or vertical channeling, etc. And lastly, espresso / coffee extraction is a science and what you lacked is a refractometer – VST makes them and the software so if you really want to know what’s happening then you must measure total dissolved solids.

Thanks for the tips. It’s a learning process for me, and I certainly discover interesting things along the way. The important thing in this case was to keep consistency as much as possible with the preparation process and compare the beans. Naturally, I’d like to make the preparation process itself better for any type of bean, and bring the full potential out.

Went to this place the other week and thought of you. Not sure if you can get hold of their beans but if you can, I think you’ll like them! :)
http://www.flatcapscoffee.com/

I never thought I’ll hear from you on my blog of all places. What’s up Simon? and what are you doing in Newcastle? (I noticed they get at least some of their beans from hasbean, which I used to buy from when I was living in the UK. It is a most excellent choice to buy from no doubt).