On my previous post, I described the architecture of Gimel – an A/B testing backend using AWS Lambda and redis HyperLogLog. One of the commenters suggested looking into Google BigQuery as a potential alternative backend.

It looked quite promising, with the potential of increasing result accuracy even further. HyperLogLog is pretty awesome, but trades space for accuracy. Google BigQuery offers a very affordable analytics data storage with an SQL query interface.

There was one more thing I wanted to look into and could also improve the redis backend – batching writes. The current gimel architecture writes every event directly to redis. Whilst redis itself is fast and offers low latency, the AWS Lambda architecture means we might have lots of active simultaneous connections to redis. As another commenter noted, this can become a bottleneck, particularly on lower-end redis hosting plans. In addition, any other backend that does not offer low-latency writes could benefit from batching. Even before trying out BigQuery, I knew I’d be looking at much higher latency and needed to queue and batch writes.

Whilst investigating those options, I “bumped into” Kinesis, which seems better suited for lambda. It offers something similar to SQS, but modelled a little differently into streams instead of queues. Kinesis would plug easily into Lambda (where SQS won’t), and allows you to control the number of items to process on each batch. This simplified the lambda function and allowed more predictable runtime and memory footprint. Doing this with SQS would be far more complex and involve implementing some kind of polling and non-deterministic execution time or bandwidth. Kinesis also scales pretty neatly. If you need more capacity, simply add a shard. The nature of A/B testing events (or analytics data) makes it very easy to parallelize. There’s no strict ordering requirements. We just get an event and need to write it. Completely independently of any other event.

Kinesis can also be used with Redis to avoid too many active connections. You can pipeline writes inside one connection / lambda function instead of spreading them across many. 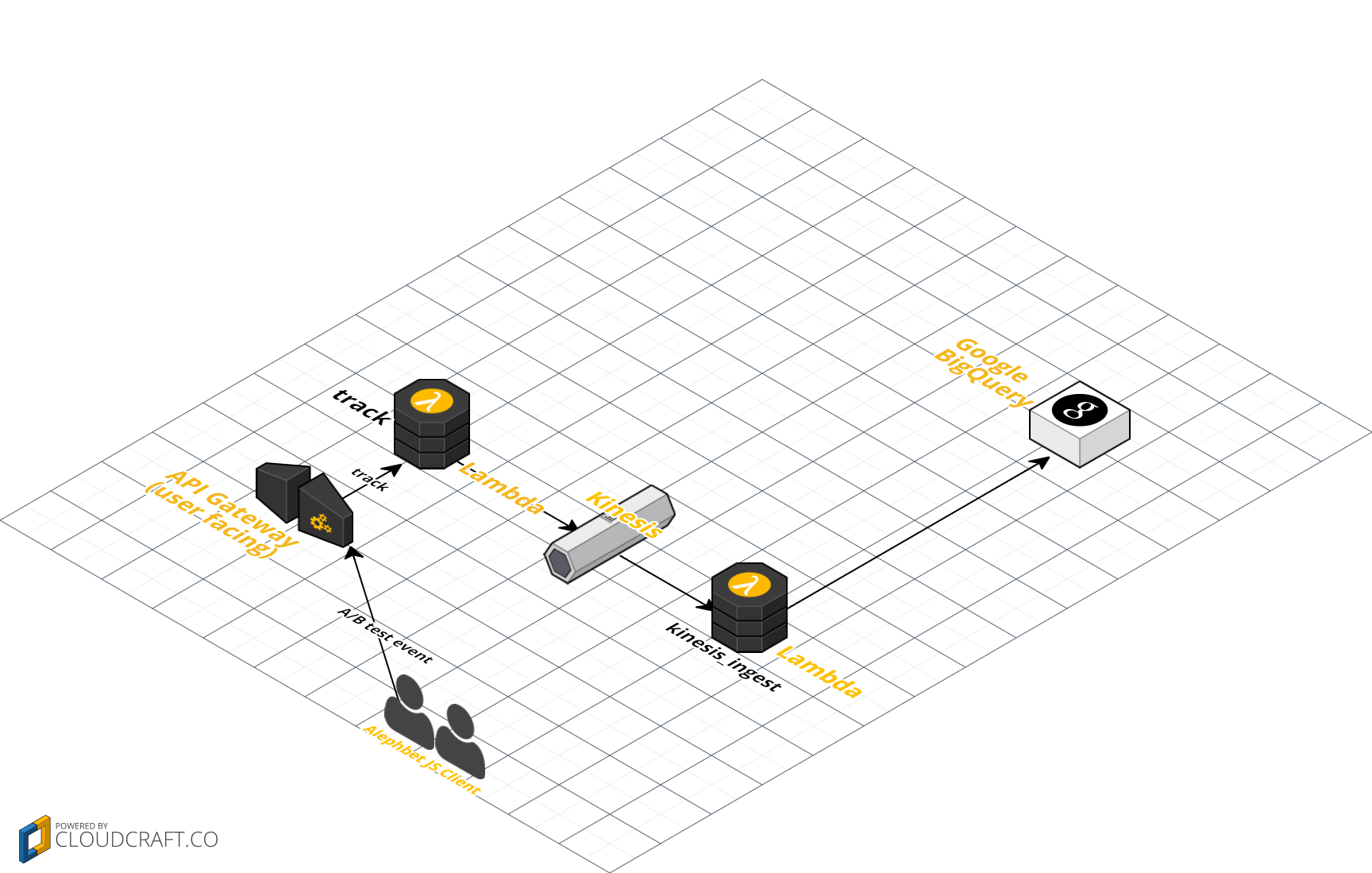 Refactoring Gimel to use Kinesis was very straight forward. I added a Kinesis Stream. Then updated the track method to put a record into the stream. Then created another lambda function that ingests the kinesis stream as its event source. It simply picks all events from the batch, and writes them to Google BigQuery. The whole thing fits in 58 lines of code (including comments and imports. Note however that it only handles the event tracking, not the reporting portion)…

As usual, the hardest part was figuring out which moving parts to choose, and working out the ins and outs of IAM role permissions and Google BigQuery oauth2 authentication :)

There’s no such thing as a free lunch. So where are the trade-offs of this architecture?

This is still fairly experimental, but you can see the code on the bigquery branch of Gimel on Github. I’m still not entirely sure whether to merge the two together or separate them into their own independent projects.

One reply on “a scalable Analytics backend with Google BigQuery, AWS Lambda and Kinesis”

I’d definitely recommend keeping these project separated, as the requirements for this version are much more complex.