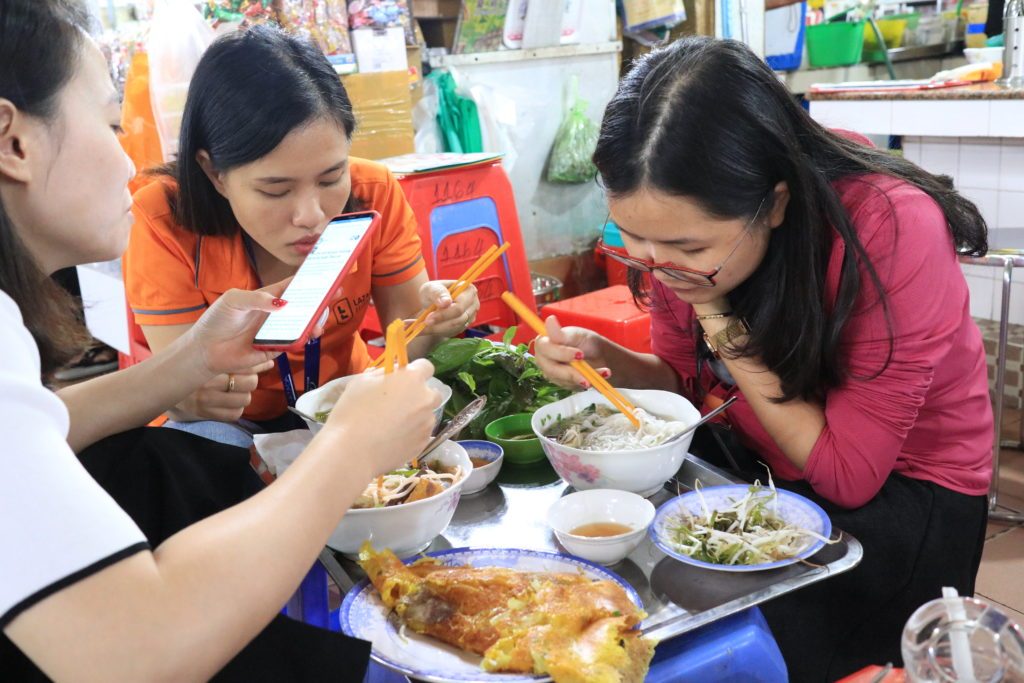 One thing that you can’t ignore however, is that as soon as you walk around, you’ll get approached by one of the stall owners. They’ll simply hand you the menu to choose from.

Now my initial response is usually to ignore those, feeling pressured to buy something. I’d rather browse quietly and choose from what looks delicious. But it’s virtually every stall. So you can’t really escape it. And since you do want to try something, and since it’s virtually impossible to know what’s really great and what isn’t (tip: nothing is super amazing, but you’ll have a hard time finding something not tasty) — you’ll end up looking at one of those menus. And very likely, you’ll end up choosing from this menu and sit down and eat something.

So let’s imagine no stall tried to push you their menu. The end result would likely be similar. You’ll just choose one of those and enjoy your meal.

But what I imagine happened, at some point in the distant past, is this: Stalls didn’t even have menus, let alone tried to push them. But then, one day, a clever stall owner decided to try a new trick. Offer their menu to tourists walking by. And guess what? It worked. This stall probably had a better business than its non-pushy counterparts.

So those other stalls observed, and realized they might as well use the same tactics. Offer their menus. And now what? those stalls started balancing things in their favour.

But obviously, the situation now isn’t much different, overall, than it was before pushing menus. But if you stop pushing them, your earning will likely fall. So you have to push your menus. Or you’ll lose to your competition.

As much as I would rather choose without being pushed, I had no way to discover the unique stall that didn’t push them. So even if I actively want to give my money to the nicest, most polite stalls. I just couldn’t. It’s not something you can just figure out.

That made me think about online marketing. You know, those popups, newsletters, discount deals, re-targetting campaigns, and all the other marketing tactics you bump into. Online companies can’t really afford not to use them. Their competitors do. And they work. They increase conversion rates. They sell. And to be completely honest, I don’t think I ever bought something thinking “Oh, these guys aren’t using any marketing. I’ll pick them”. And unlike the food market, I guess those companies are easier to find, or recognize.

Another thing I noticed however, was that I never wanted to go back to the Ben Tanh market. There were much nicer local restaurants, with better food. No pushing. And cheaper too.

I think this reflects on how those marketing tactics help reach a local maxima. When I was there, I was affected by it. But then I opted out completely. When I’m back in Ho Chi Minh City, I’m unlikely to go back to the market. I’m very likely to come back to some of the excellent restaurants though.

I guess the same goes for ad blockers. I can’t figure out how aggressive ads are going to be, so I opt out of all of them.

I’m not sure what’s the solution for websites though. There’s no way to know in advance which sites are not using those tactics. People just become more defensive and skeptical to begin with. The good websites out there aren’t getting more traffic or business, at least not in the short term.

I’m also feeling like a hypocrite, because I end up using the same tactics. But I just can’t lose business to the next stall. I feel trapped. But nevertheless, I’m doing business in the same street market that the modern web is. How can I escape this trap and set up my own restaurant outside it? I don’t know.